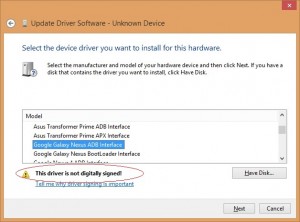 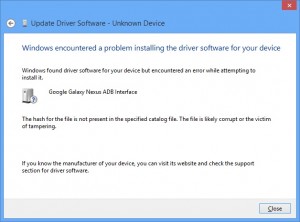 This is because Windows 8 enforces driver signing. If it’s not signed, Windows 8 says tough! Well, I found a couple ways to get by this, keep reading to find out how… END_OF_DOCUMENT_TOKEN_TO_BE_REPLACED

As I mentioned in a previous post, the Cisco Cius is an Android tablet designed for corporate use.

I’ve been using mine for roughly 5 months. Initially, I loved it, but it’s proved to be less than (insert some mediocre phrase here). It wasn’t bad, but also wasn’t great. However, over time, the tablet performed worse & worse. The week before last, it pretty much became non-functional. It would drop the SIP connection on wifi, I do have a dock for it, but no POE+ drop to power it. I tried to go into the About section of settings and that started force closing on me. Eventually I got to the point where a full wipe was needed.

I did a quick Google search to see about custom ROMs (again), getting into Recovery, or if there are updates. I did find one update, that update being that Cisco is dropping the Cius.

Senior VP of the TelePresence Technology Group, OJ Winge, wrote, “Cisco will no longer invest in the Cisco Cius tablet”, in This Blog on May 24th. I was really hoping Cisco would have put a lot more effort into it and made it great.

I cannot say I’m surprised, though, I bet I’m the lone user of the Cius table of all that were issued/demo’d here at my employer. I see several laying around, collecting dust, because user experience just wasn’t there. One even has a post-it note simply saying “DEAD”. Initially, it came with Donut (Android 1.6), no Market (Play Store), and was clunky. Luckily, the one I use had a newer ROM, but it was still sluggish and didn’t perform optimally.

I’ll continue to use it, unless it tanks on me again, forcing a wipe, at which time it’ll probably end up on a shelf, too…

I’ve been using a Cisco Cius 7″ Android tablet for several months now and am starting to have mixed emotions about it. Initially, I loved it, especially since it now has 2.2.2 (Froyo) and Google’s updated Play Store. It also allows side-loading of apps, so I have the Amazon Appstore, plus Cisco’s AppHQ. Overall, it’s fairly snappy, but is Atom-based (at 1.6GHz), so custom ROMs are pretty much non-existent.
END_OF_DOCUMENT_TOKEN_TO_BE_REPLACED

I received a demo of the Ultrabook and I have to say I’m pleased out of the box.  It’s obvious it took some cues from the ‘other’ laptop, and it’s nice.  First thing I noticed is how light and thin it is.  It’s probably as thick as my Viewsonic G Tablet, and boots faster.  I timed it, from the time I pressed the power button, until I had a mouse pointer without the ‘wait’ signal, was about 20 seconds.  The windows boot logo never even finished!  Craziness.
END_OF_DOCUMENT_TOKEN_TO_BE_REPLACED