Over the last year, we’ve been doing a lot of testing with VMware Cloud on AWS (VMC) and it’s pretty slick. In the past, we’ve used our physical parameter device (Cisco ASA) to handle the VPN traffic, but yesterday I wanted to set up a VPN to the management gateway, and I wanted it done now. Since I don’t have direct access to the ASA, I have to submit a ticket to our NetSec team to have them do it, and they have their own work going on, so naturally I decided to use an NSX Edge for this.

I pulled up the two interfaces side by side so I could fill out both at the same time, but I noticed the VMC side was missing a few things that I had on the NSX side: Local ID & Peer ID. But the VMC side also had an option for IKE & SHA versions, which I didn’t have on the NSX side. Keep those in mind as you step through this, let’s get started…

My NSX Edge is actually behind the ASA I mentioned earlier, but I have some public to private NATs in place already, so I used one of those and set a secondary IP on my ESG’s uplink interface. I wanted to connect to the Management Gateway so I could have direct access to the vCenter, which can be seen here: 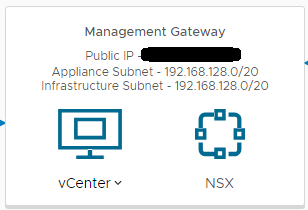 And I’d need an IP on my NSX Edge for the VPN tunnel, so I added the secondary address:

Here’s my VMC on AWS VPN to the Management Gateway

Now lets look at the NSX side of the VPN tunnel 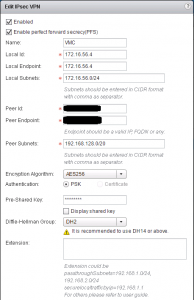 From there, the VPN tunnel connected; however, the firewall rules may not be in place to allow my local segment to talk to the management segment on VMC. Never fear, VMC has “Firewall Rule Accelerator” that will generate the rules you need to allow the segments to communicate:

Now I’m good to go, with firewall rules in place

I got an error stating the IKEV1 password issue, which I’m sad I didn’t screenshot because I haven’t been able to completely recreate. As it turned out, it was directly related to the Local & Peer IDs. Typically, when setting up an IPSec VPN tunnel between two NSX Edges, you can set your IDs to match. For instance, if I did them between ORD and IAD datacenters, the ORD NSX Edge would have the Local ID of ORD, and Peer ID of IAD; and vice versa for the IAD NSX Edge. Since there were no options for local or peer ID on the VMC Side, I kind of stumbled through it. On a whim, I tried the IPs and it connected flawlessly.

You’ll also want to make sure that the local subnets/network match what’s entered in Peer Subnets (NSX) or Remote Networks (VMC). I added an extra subnet on the NSX side and then received a different IKE error on the VMC side:

And there you have it! That’s all you need to establish your site-to-site IPSec VPN tunnel from your on-prem datacenter to VMC on AWS using NSX!