I’ve been a fan of fitness for many many years. Am I an “athlete”? I’m sure that depends on the interpretation, but the word athlete is defined as a person who is proficient in sports and other forms of physical exercise. I played football in middle school, by high school, everyone was bigger than me, so I played golf my entire high school career.

After high school, I began going to the gym, mostly light strength training, I would run a little here in there. And by a little, I mean 1-2 miles. I ran a 5k in high school when I was maybe 16, and think I finished with a time of roughly 26 minutes & change, by no means fast.

Fast forward to today. I still hit the gym, although more focused on strength & high intensity. Every once in a while, Google Now will throw something into my feed that’s interesting. A while back, I saw an article from Runners World: The CrossFit Workout Runners Should Actually Try. It outlined some workouts regularly found in CrossFit to help runners.

Where am I going with this?

The comments on that article were blasting CrossFit, so I looked around at more similar articles and saw the same thing. It seemed like every “trained athlete” knocked CrossFit. Everyone has something negative to say. In typical internet fashion, everyone is an expert in their hobby and knows better than everyone else, so they feel compelled to chime in and say the article is wrong, don’t listen to it, whatever.

Now, as mentioned earlier, I’m not a runner, I’ve never ran more than 3.1 miles in a single run. I started doing CrossFit back around April of 2013, had an injury in August of 2013, had surgery October 2013, then PT’d back into CrossFit around January or February of 2014. Since then, I’ve been fairly devoted, doing CrossFit workouts (aka WODs) 3-4 times a week. Some weeks I’d do Mon, Tues, Thurs, Fri, and other weeks I’d do Mon, Weds, Fri. Every once in a while I’d throw in a 2-mile run through my neighborhood on an “off” day, but at most it was once a week. 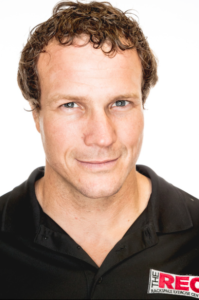 Well, on December 1st, 2015, I was very graciously offered a free pass to the San Antonio Rock & Roll Marathon on December 12th of 2015 by Daniel Bahr, CEO (Chief Encouragement Officer, that is) at Rackspace’s REC, pictured at the left, a mere 11 days before the race. I decided to take it!

How did I train?

I chose to change nothing, at this point, my plan was to show up and run, and hope for the best. I’ve heard many people say they hit the proverbial “brick wall” around mile eight, so I tried to remain positive. Starting a few days before, I made sure I ramped up my carb intake, drank even more water than I already do, and just tried to prepare mentally. Starting on Wednesday, I scaled back my weights in CrossFit so I wouldn’t be sore for the Race.

The morning of, I ate some oatmeal, a banana, a bagel, and I’m sure a handful of other things I can’t remember, I actually ate a lot. Since I had no estimated time, I was in the very last corral. I told myself, “just stay in front of the car”, as there was a follow car behind us. After about a 45 minute wait for my corral to start, it was time. My game plan: just pace yourself, run it easy, and run for as long as you can. If you have to walk some, that’s okay.

The energy was really high, people cheering, bands playing, and homeless people sifting through the piles of clothes shed by other runners. I was pretty amused by that last part, myself. I even heard one homeless person say, “I’ve got enough gloves, don’t need anymore” as he dropped a pair of gloves left along the race route.

Anyway, I was running from side-line to side-line, high-fiving random people cheering us on, I whistled, cheered, and raised my hands for the bands as I ran by, and just generally had a good time. Next thing I knew, there was the 5k turn off. Wow, really, already? Looking at my results, I ran the 5k in 27:02. Not a personal best, but pretty close to the time I ran 20 years prior, and I was “taking my time”, “pacing” myself. “Okay, I got this!” I told myself, so like Forrest Gump, I just kept running. I crossed the 10k mark at 58:37, that’s the longest distance I’ve ever ran in my life! It felt good, so I just kept going. The mile eight marker came and went, then nine miles, no brick wall, so I just kept running.

As I approached the 10 mile mark, I realized I had been running non-stop for over an hour and a half, 1:38:52, to be exact. I’ve never exercised for anything this long before, closest was the first time I did Murph at 79 minutes in 2013 (pictured wearing the plate carrier), and I think the longest I’ve ever cycled wasn’t much over 10 miles, maybe 12? 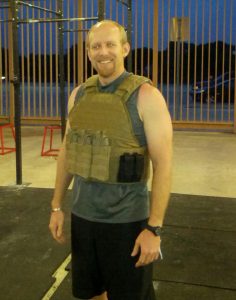 It was after I crossed the 10 mile marker that it became a struggle. And by struggle, I mean more mental than anything. I guess that was the “brick wall” people talk about? I told myself, “okay, you’ve just left the porch at home, just run the 3-mile route through the neighborhood and you’re done.” My pace really slowed after that, but I made the decision to just keep running. I’d run this far, I’m not stopping now. When I rounded the last turn to see the final stretch, it was extremely congested, so I ran along the outside to pass people. I made sure I finished strong, although it probably didn’t look as strong as it felt in my head & body.

I felt this huge sense of accomplishment the second I crossed the finish line, and clocked a time of 2:14:52. I know that’s not record setting, and many may laugh at that time. However, stop and think about it. I did zero running training whatsoever, I attended CrossFit classes 3-4 times a week, and ran 2-3 miles maybe 2 times a month for a few months (I’m not consistent).

Here are some things I’m proud of:

Now, if I hadn’t started CrossFit and just followed my normal exercise routine, I may have been able to finish, but I bet it would have been a lot slower. I’m thankful to have folks like Dan who have built an awesome gym and CrossFit facility for us to use. It’s options like these that have helped me get to the next level.

Why am I writing this?

The truth is, if I had specifically trained for running, I would have gone faster. I’m not debating that, my point is fitness. We all behave and react differently to training and fitness. Some are better suited for long distance running, some are able to squat snatch insane amounts of weight over their body weight. What I want to do is bring the fitness community together and stop the hate among the different groups.

We’re all people who exercise and train hard toward a similar end-goal: being better. We all have a love for fitness, a passion for something, let’s share in that passion instead of picking apart the other’s regimen. If you’re a runner, you train for running, and it doesn’t hurt to add in some strength training. If you’re an olympic lifer, you do olympic lifts. I feel like a GEICO commercial, lol! CrossFit is a mix of olympic lifting, gymnastics, & short bursts, it’s not some crazy thing most people make it out to be. If you’re strength training, your fitness will benefit from some running exercises. We can all benefit from different exercises, that’s the point of cross training, and exactly what many articles advocate. They’re not saying in order to be a good runner, you should only do CrossFit, they’re saying you should cross-train, vary it up, add different exercises to your fitness plan. I’m a huge supporter of cross training and see the benefits we can all get from it. I’m still a golfer and my average drive is easily 50 yards longer since being an active CrossFitter, and my irons are longer, too! Gary Player is a good example of fitness & cross-training, but I’ll save that for another day.

We’ve all got something to learn from each other, so lets stop the hate and work on making ourselves a better athlete for tomorrow.

I wanted to add an update to this post. This past weekend, I ran my second half marathon (San Antonio Rock n Roll series) and shaved nearly 15 minutes off of it, 14 minutes and 53 seconds, to be exact. That’s more than a mile per minute I improved, about 1 minute & 8 seconds per mile, on average. Although, after looking at my pace, I realize it wasn’t that simple, the improvement was all after the 5k mark. Unfortunately, the tracker didn’t pick up my 10k time, but judging by my speed & pace throughout the race (and my GPS watch), I stayed pretty steady throughout the entire race.

What’s worse is the race weekend was a miserable 52-53 degrees F with rain & wind. My poncho turned into what felt like a parachute several times when running into the wind, or even dealing with a cross wind.

You can clearly see that I slowed down steadily throughout the race. My speed shows it, too:

This shows that I stayed pretty steady through the entire race after the 5k, although I didn’t get tracked at the 10k mark. 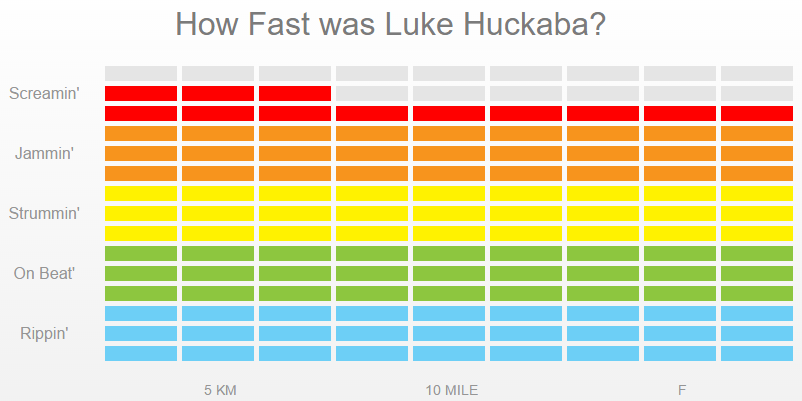 Looking at the data from my Garmin watch (screenshot from SmashRun), you can see where I started picking up the pace after mile 10, and I felt like I could have run harder.

CrossFit. Four days a week: Monday & Tuesday, and Thursday & Friday. I’d use Wednesdays as my rest day, and sometimes would run two (2) miles on a treadmill while at PlanetFitness with my wife. I had planned on training specifically for running, but most of the time I wanted to use my rest days as real recovery days. I remember one week we had heavy squats, and I ran three (3) miles on a Wednesday, which exacerbated my legs’ soreness, so I decided to just stick to CrossFit and run on the Wednesdays where I felt like it. And to be fair, that running didn’t start until maybe September or October.

I owe it all to my coaches and their attention to programming.